On a trip to Maine in the spring of 2016, SRBTC, in conjunction with fishermen from TU’s Nor’East Chapter (Ipswich, MA), spent a long early June weekend fishing the Dennys River thanks to a generous donation from Robinson’s Cottages Camps in Dennysville, Maine. The Dennys River was once renowned for its Atlantic salmon run. When the salmon stopped returning – and the fishermen stopped coming to catch them – the Dennys River Salmon Camp fell into disrepair and was recently donated to the Downeast Salmon Federation to help with DSF’s work in developing run-of-river hatcheries to help bring back the salmon.

However, this watershed, once famous for salmon, also contains large populations of sea-run brook trout. SRBTC co-founder Warren Winders reports that Jerome V.C. Smith, possibly one of the first to be writing about fly fishing in the early Nineteenth Century, went on a quest to be among the first to catch an Atlantic salmon on the fly in the Dennys River. Dr. Smith’s 1883 report stated the trout were “so numerous” as to be “unequalled” – so much so that their “numbers proved annoying.” Smith was reporting that because he was so frequently interrupted by trout taking his fly that he became annoyed — and he never did catch that salmon.

It is quite conceivable that with the right kind of promotion, and with an improved understanding of trout behavior, anglers might start to come from all over the country to target sea-run brook trout like they once came for salmon. If you wish to fish Downeast Maine for brook trout, by all means please reach out to Billy Robinson, as he grew up fishing and guiding in Downeast Maine and his family built and maintains a lovely and very comfortable group of riverside cottages that are beloved by anglers and nature enthusiasts alike.

On both trips to Maine in 2016, we also fished the Orange River. On one day in May, fishing was quite spectacular. But by June it was a bit disappointing as the drought had caused the water levels to drop and despite lots of fishing, only a few trout were caught. One of our party reported seeing a large fish trying to leap up the 40 foot dam. Perhaps that was a salmon. Could it have been anything else? 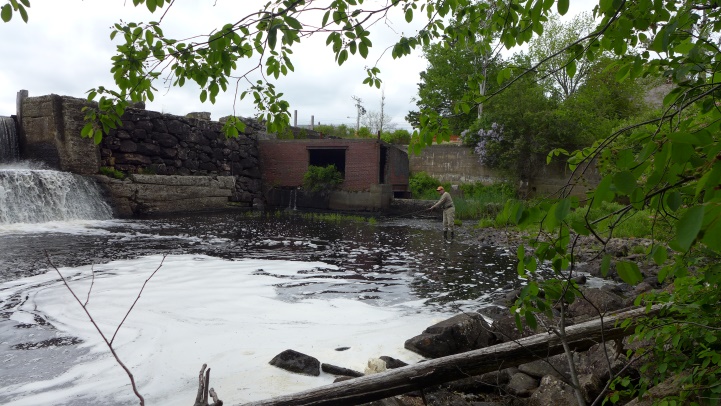 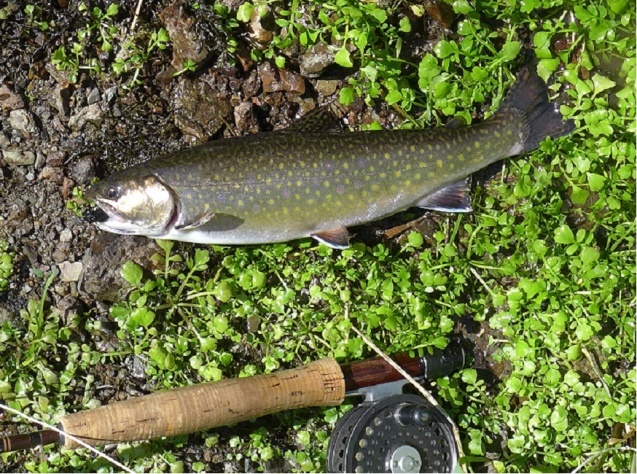 Notably the dam there on the Orange River in Whiting, Maine is now owned by the Downeast Salmon Federation, which is exploring options with the town to try to bring back native sea-run salmon, trout and some ten additional anadromous species in the river. The presently dammed Orange River flows for 4.8 miles and empties into Whiting Bay, which becomes Cobscook Bay. The lower tidal reaches of the Orange are joined with non-dammed East Stream, which, as you might imagine, is loaded with wild salter brook trout as are the lower reaches of the Orange River when the conditions are right. The Orange River is now a flagship conservation project of the Maine Coast Heritage Trust, which is raising $2.2 million to protect some 2,300 acres there.

In this map provided by the Eastern Brook Trout Joint Venture, note the orange “wild trout patch” ends at the red dot, which marks the Whiting Village Dam. The Maine Coast Heritage Trust’s Downeast Office, based at DSF’s EMARC Facility in East Machias, is headed up by Jacob Van der Sande. We can’t ask for a better advocate for sea-run trout, as Jacob did his graduate work studying anadromous brook trout in the Laval River in Quebec, Canada.

Despite what the map says, I can say that there is no question in my mind that sea-run brookies can be caught below the dam. And in theory, they can be found all the way through Cobscook Bay and all the way to the sea. Yet, because the dam blocks access to breeding habitat, these fish – and other anadromous species – are significantly limited in their ability to reproduce. That said, there are many brooks without dams where the brook trout can reproduce. Think what this place could be once they pull down the forty foot dam that has been blocking this river for centuries.

I’ll leave you with this one story

Guided by Billy Robinson, we launched our four canoes in one of the only put-ins there at the top of the Dennys River. I was excited as we’d had a lot of buildup. Billy Robinson tells great stories, and we knew we’d be catching fish as he’d fished the river just days before. I was prepared, with two GoPro Cameras and another digital camera in a dry-box, just in case. I was canoeing with Fred Jennings, President of the Nor’East Chapter of Trout Unlimited. While I had canoed with Fred before, this would be my first time in potential white water situations, so I was a bit apprehensive.

During the first three minutes of the trip I suddenly saw large schools of herring beneath the canoes – and lurking just beneath them, sure enough, were large schools of very large brook trout. We all saw them and later agreed we must have seen about forty brookies that had to be at least 18 inches and up. However, none of us were quick enough with rods or cameras (or skilled enough with our paddles) to do anything about this amazing scene unfolding beneath us in the clear water.

Only after telling this story and remembering the eagles that preceded us as we floated down the river did it occur to me what was going on. These fish were likely taking cover beneath the herring to avoid predation from the pair of bald eagles that were sitting in the pine trees just above this pool. For the next two days we caught plenty of fish and whenever we saw eagles, we knew we were approaching a spring hole or productive section.

Fishing the Dennys was fabulous. We caught salmon smolts, brook trout, bass and chub; and we all enjoyed the eagles, deer, beavers and otters and the gorgeous 18 mile uninhabited river. However, upon further reflection, the Dennys River tells a different story. The Dennys is a microcosm that illustrates problems affecting brook trout streams virtually everywhere. Just above that first pool at the put-in is a series of dams that would block fish passage if not for a fishway put in to allow herring passage. While DSF has cameras in those fishways, we have no indication that the trout are using them, so for all we know those trout were doomed to become eagle food or to be taken by local anglers – after all, there is a five fish per day limit. Above that herring run is Meddybemps Lake, a 6,700 acre impoundment which is maintained at certain levels by the local townships, presumably so that docks, boats and waterskiing provide optimum pleasure for summer tourists and maximum values for property owners. The lake is also well known for prolific smallmouth bass that were stocked back in 1869, so bass have been flowing down the Dennys for well over a century. Smallmouth bass are well known to decimate brook trout populations. Of course the dam and lake also prevent the Dennys from flowing naturally. Natural sediments end up in the lake, which reduce available oxygen in the summers. Warmed waters from the lake also presumably raise the temperature in the river during the summer, which further impedes trout survival.

The Dennys is also, just like every other river in Maine, the result of centuries of environmental engineering work done by the logging, milling, hydropower and other industries. Not only has it been dammed and straightened and blown out through log drives, but its banks have been cut over countless times so any natural sinuosity or woody cover that would provide shelter and spawning habitat in an undamaged river is significantly missing. There are countless other unfortunate issues affecting rivers in Maine, but to go on about them would be impolite, so I’ll stop there. It is testament to the highly adaptable brook trout that anything at all survives in these systems.

If you go to Maine in search of sea-run brookies, please help support Maine’s emerging new destination fishery by fishing responsibly and by donating or volunteering for any of the many organizations working to enhance and restore anadromous fisheries in Maine. Organizations include the Downeast Salmon Federation, Maine Coast Heritage Trust, Maine Audubon and Maine Trout Unlimited. In some cases, free lodging may be available through sponsoring organizations, so please contact SRBTC if you wish to go.

This article, with only slight modifications, was originally published in SRBTC’s Salter Newsletter, Winter 2017 issue.