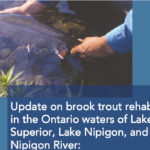 Update on brook trout rehabilitation in the Ontario waters of Lake Superior, Lake Nipigon, and the Nipigon River

Brook trout populations have declined from historic highs in the Ontario waters of Lake Superior, Lake Nipigon, and the Nipigon River. In an effort to enhance populations, a protective sport fishing regulation was applied in 2005, allowing the possession of 1 brook trout greater than 56 cm (22 in) in length. Associated with the new regulation was a public recommendation to review the status of brook trout after a five year period. As a result, in March 2011 the Ontario Ministry of Natural Resources (OMNR) hosted a workshop to present information collected from 2005 to 2010, review the progress of brook trout rehabilitation, and to discuss future actions.

Brook trout populations and fisheries in Lake Nipigon showed substantial change after the sport fishing regulation was amended. Brook trout numbers and average size increased in two Lake Nipigon spawning populations, although numbers remain at a fraction of 1930’s levels. Catch rates of the average angler have improved but remain below management objectives. Declines were observed in the total number of brook trout caught by anglers and also in the proportion of anglers targeting brook trout. However, both measures returned to pre-2005 levels. Catch rates by co-operative anglers exceeded management goals for Lake Nipigon. The proportion of spawning brook trout protected from angler harvest increased by 43% and 59% in two Lake Nipigon populations.

Although protective sport fishing regulations have been in place for a short period (five years or approximately one brook trout generation), signs of rehabilitation are encouraging and the current regulation is recommended to remain in place.