On November 23, 2019, key members of (Nor’East Trout Unlimited) and the Town of Manchester’s Stream Team met for an initial visit, starting at the Manchester Town Hall and then taking a tour of the relevant waters. Attending this initial meeting were SRBTC, TU Nor’East members and members of the Manchester “Stream Team” pictured below.

General introductions were made at Town Hall, followed by a discussion of the project and the importance of these remnant wild native trout populations, of TU Nor’East’s role and participation in other similar projects, and of the Manchester Stream Team’s role in the protection of several local Manchester watersheds. After this meeting at Town Hall, we proceeded quickly to a tour of a local brook (the “Brook”) and two of its tributaries.

The background and context of this project is also important. In 2017 and 2018, eDNA (Environmental DNA) studies were conducted in numerous streams and tributaries on the North Shore by TU Nor’East (NETU) and the Sea-Run Brook Trout Coalition (SRBTC). These studies suggested a strong possibility of brook trout in the Brook. Then, in August of 2019, in response to our request, Massachusetts Division of Fisheries and Wildlife personnel came over with their electrofishing equipment and confirmed the presence of naturally-reproducing native brook trout in the Brook, finding three different year classes of trout (see photo of these trout in the white bucket below). This very exciting conclusion also meets a quick-assessment standard for a “healthy” and viable population of trout in these waters. 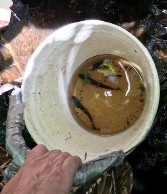 The Brook is a small groundwater-fed stream that flows just a few miles before it discharges into the Atlantic through a tidal gate that limits both the Brook’s outflow and the influence of tides on the lower portion of the Brook above that tide gate. It is believed that this tide gate also limits the reproduction and access of anadromous fish, including smelt and sea-run brook trout as well as other species such as herring, shad, etc. The Town is presently undergoing a planning and fundraising effort intended to remove the tide gate in the coming years. 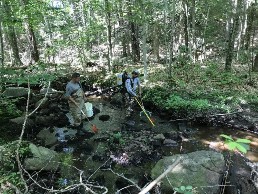 The eDNA results and the findings from our electroshocking efforts have gained an intense interest from both the NETU Chapter and the Manchester Stream Team members. Consequently, we are currently exploring the prospects of doing further research on these waters and perhaps following up with some stream restoration work to help protect these wild native trout through habitat improvements. This is most especially relevant due to both the uniqueness of this fishery and the fact that this is a potentially important coastal access brook for anadromous species. These two findings occur in the context of prior research showing a lack of brook trout in some 30 other coastal access streams spanning from Southern New Hampshire to Gloucester, Massachusetts; and because the Brook has a real potential of becoming the only Massachusetts sea-run brook trout stream north of Boston.

So, returning to our report on the November 23rd events, our first site visit after the Town Hall meeting involved taking a look at the tide gate at the mouth of the Brook and then crossing inspecting the lower reaches of this waterway, noting that some of the wall structures along the stream were in disrepair. Next, we drove upstream to a section of the Brook, where TU has been maintaining a Hobo water temperature monitor since 2018. It turns out that this location is quite popular with beavers, and we learned that there had not only been some recent beaver activity, but that there had also been some human activity to remove the beaver dam and to place a large corrugated metal pipe into the stream to allow continuous flow, no matter how active the beavers might get.

Next, we visited a tributary of the Brook which is significant because it was in this tributary that we found three trout in a stretch of about thirty meters in length during our August 2019 electrofishing effort with the Massachusetts Division of Fish and Wildlife. These fish were found despite their being concealed within very heavy underbrush punctuated by saw- briar, bittersweet vine and poison ivy.

Our third stop involved a section of the Brook, where we found a substantial backwater situation, apparently being caused by a very active beaver dam below that location. We also visited a second tributary, which appears to have been subjected to the same backwater conditions from one or more beaver dams.

Our initial discussions for this Project have focused on possible opportunities to improve brook trout habitat throughout the watershed, as well as the possibility of teaming with The Governor’s Academy and hopefully other schools to conduct water quality analysis work as a class participatory process similar to the project that students completed with our assistance over the last three years on the Mill River near The Governor’s Academy grounds.

We officially designated this “Project Voldemort” (He who must not be named) because it concerns one of the few if only streams still remaining on the North Shore of Boston that has a verified population of wild native brook trout. We intend to protect these fish in whatever way possible. This would requesting a special “Restoration” status that would prohibit the fishing for or taking of any trout from these waters. Consequently, please do not inappropriately broadcast the information about these streams, our findings, or our interest in their restoration, since these trout populations are very small and dangerously vulnerable to extirpation or abuse.

This article is reprinted here and was originally printed in NETU’s January 2020 Newsletter which is linked here if anyone wishes to see the entire newsletter. Thank you to NETU’s James Shimer for his excellent work on this newsletter and thank you to NETU for their ongoing support of this work.