The Indian Head River is the major tributary of the North River. Its degradation is similar to that of many other rivers. In other words, it is a case study of how to kill beauty and life.

Rivers don’t die easily, and this one is trying to stay alive.

I went down to the Indian Head River awhile back with Roxie the Wonder Dog to check things out. Conditions were about what we’d expected. The February thaw with its rain and melting snow had the river swollen and bank full, and moving along at a brisk clip. Roxie and I hung around at the little canoe launch ramp as the setting sun turned the sky, behind a lacework of swamp oaks and red maples, salmon pink. Reassured that the river was still flowing, we felt better about things in general, and left somewhat shored up against the waves that western civilization would toss at us via traffic, work, TV, and the Internet.

Checking in on the Indian Head at all seasons is a ritual of mine that goes back to my beginnings as a fly fisher almost 40 years ago. The strange thing about this is that I’m far from alone in my ritual. I may drive to the stream intending to spend some time there by myself, only to find another angler, or two or three others, pacing the bank and staring down river. 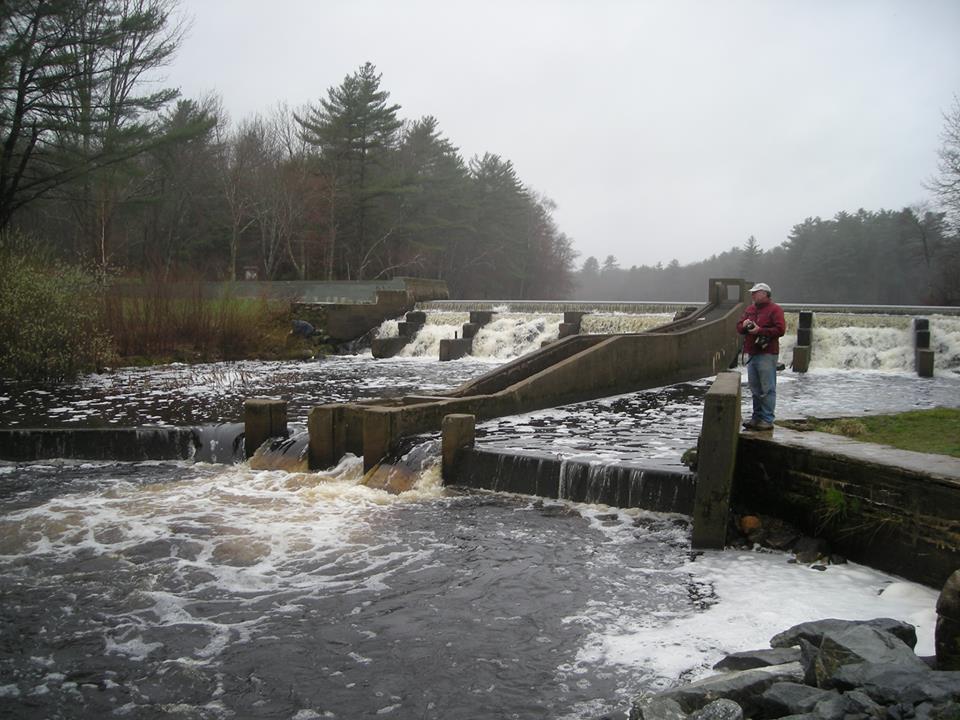 Dam number one on the Indian Head - at Luddam's Ford, where an indentured servant of that name was forced to carry Governor John Winthrop across the Indian Head on his back in 1632. By 1693 there was a dam at this location.

As rivers go the Indian Head is small, in its naming suffering from the Pilgrim’s habit of calling anything bigger than a brook a river. The real lure of the Indian Head, in part, comes from its close proximity to the sea. One might argue that at 13 miles inland from the Atlantic, the Indian Head is hardly a coastal stream. And you’d be right, except for the fact that what makes the Indian Head unique is the moon’s habit of pulling the sea 13 miles – more if one adds the many bends – up the winding course of the North River to flood into the Indian Head’s lower reach. Here the Indian Head joins Namasakeeset Brook to give birth to the North in an extensive freshwater marsh where the water floods and then recedes several feet with each tide. The marsh itself is a broad vista of cattails and wild rice rimmed by forested uplands. It’s an untamed place, left wild because, other than for water fowling and fishing, the settlers couldn’t find a use for it. 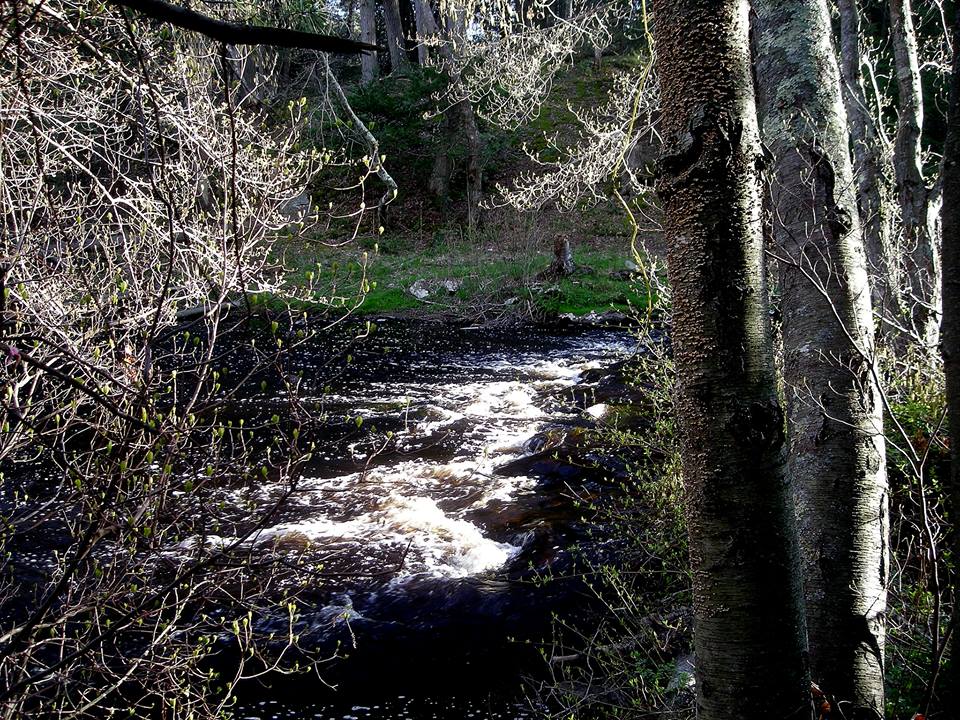 The Indian Head in spring time where Project Vale once flooded the valley.


And that is what draws us to the canoe launch. From there we can look down stream toward the marsh and its wildness. And in spring, when the water temperature rises above fifty degrees, we watch for the arrival of the shad with the evening tide, their backs waking the slick, black surface of the river as they move up to reclaim their ancient spawning water.

That the shad return is a source of wonder and comfort, because the Indian Head, as beautiful as it is in places, is a much-abused stream. A scant quarter of a mile upstream of the canoe launch, we encounter the old Clapp Rubber Company Dam – with its dilapidated fish ladder – that is better known as Luddam’s Ford Dam. It is the first of several dams on the Indian Head and its tributaries. Not far beyond the tail of the Clapp Rubber impoundment there is the ruin of the Waterton Dam that once held back the water of an impoundment named Project Dale. Project Dale flooded out two older milldams that are now, like the Waterton Dam, breached structures that are crumbling into the river. Further upstream one encounters the remains of the Cross Street Dam. While the bulk of the Cross Street Dam washed out in the 1938 Hurricane that also caused the Waterton Dam to collapse, its base of granite boulders continues to block fish passage and impound the Indian Head far above Cross Street. If we continue upstream, we arrive at the point in the woods where Indian Head Stream and Drinkwater Stream join to form the Indian Head River. From there, it is not far up the Drinkwater until one encounters Factory Pond Dam, and above Factory Pond there is Forge Pond Dam. If we were to travel up Indian Head Stream we would soon arrive at the Wampatuck Pond Dam that stands between the Indian Head Stream and its natural headwater at Indian Head Pond.

It is easy to see that the Indian Head has been damned by the dams that were placed on it. The cumulative summer time thermal effect of all of these dams is a river that flows into its freshwater tide marsh at temperatures as high as 85 degrees Fahrenheit, high temperatures that are lethal to many native fish species.

Making matters worse, Factory Pond, on the Drinkwater, was the site of the National Fireworks Company. For decades National Fireworks and its predecessor used Factory Pond as a dumping ground for the toxic wastes of their manufacturing process. One of the byproducts dumped into the pond was mercury, with the result that the Indian Head’s wild fish are classified as toxic to humans. While Factory Pond qualifies as a Super Fund site, a federal government beset by budget issues has handed the responsibility over to local authorities.

Before the dams were built, and other atrocities were committed, the Indian Head nurtured a vast array of native and diadromous fishes that in turn provided sustenance for humans, wildlife and the complex web of marine life that makes up the ocean ecosystems out beyond the mouth of the North River. Salmon, smelt, river herring, eels, striped bass, white perch, brook trout and lamprey eel were, in addition to shad, the fecund mix that ebbed and flowed – with the pull of the moon – from the waters of a pristine Indian Head River.

At this point you may be asking: Why bother with a lost cause? The first part of the answer to that question is simple: Look around – the Indian Head is not the only river to have been trashed by dam builders who made their profits and then walked away. In fact, it’s fairly representative of the dysfunctional watersheds that we’ve inherited from previous generations. If the Indian Head is lost, then so are many other rivers, and if that remains the case, future generations are going to have a difficult time feeding themselves.

The second part of the answer is more personal, dealing, as it does, with how I feel. The Indian Head, like all living things, is at work healing itself. The site of the former Project Dale impoundment that can be accessed off of Water Street in Hanover, is an enchanting reach of riffles and pools that come alive in spring time with mayflies, caddis flies and stoneflies. Hemlocks shade the pools, and violets sprinkle the sunnier banks with their color. All of this beauty exists thanks to the 1938 Hurricane that tore out the Waterton dam, doing the river, and us, a favor. This too short of a reach of free river, like the view from the canoe launch, shows us what the entire river once was, and what it can be again. 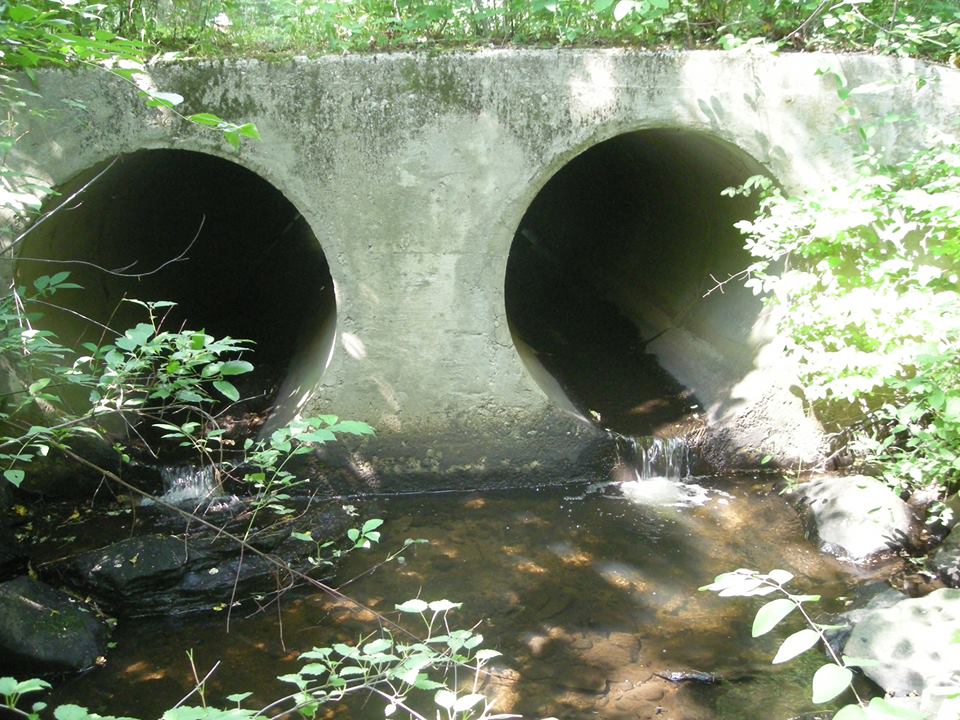 These perched culverts keep cold water species, like brook trout, from escaping the high temperatures of the Indian Head that occur in summer because of the old dams and impoundments on the river. The culverts serve a road that ends there, so like the old dams in the river, they serve no purpose other than death. Any society that can't address wrongs as obvious as these is pathetic.

And, as the Indian Head is trying to heal itself, its fisheries are waiting. There are wild brook trout clinging to survival in Iron Mine Brook, the little stream that flows unnoticed through perched culverts to enter the Indian Head at the canoe launch. These are the likely descendants of brook trout that once freely roamed a river that ran cool through the summer; a river where salmon spawned and their parr lingered for two turns of the seasons before smolting and moving out to sea. The brook trout are waiting for the river to cool down, just as the herring that are blocked by the Clapp Rubber Dam, Cross Street Dam and the Wampatuck Dam are awaiting the storms that will free the river and allow for passage up to their ancestral spawning waters of Indian Head Pond. Rivers and fish participate in a grander time frame than we do.

So I don’t see the Indian Head as a lost cause: Never will. Soon, I hope to be staring down river toward the marsh in the growing dusk of an early spring evening. I’ll be waiting, along with a few other anglers, for the shad – now 13 miles from the sea – to begin to show themselves. Their wakes and swirls will announce their homecoming, and our ritual of waiting will have been rewarded. Our ritual, so intertwined with the shad, celebrates the idea of a river. And the river is our home.