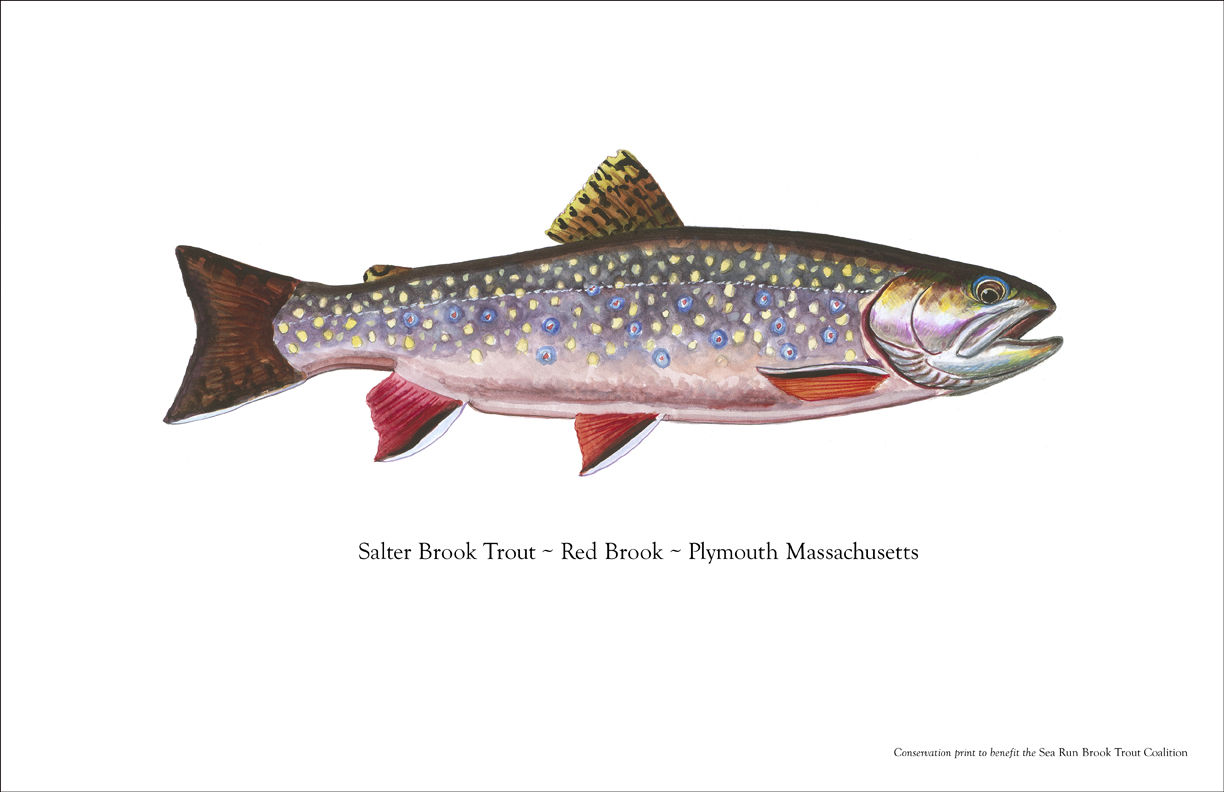 Get a sea-run brook trout to benefit SRBTC.

James Prosek’s limited edition watercolor print of the Salter Brook Trout taken
from a Red Brook Sea Run Brook Trout shown above,
is available framed and matted in a cherry frame or as a loose print.

This print was created specifically by James Prosek to benefit the Sea Run Brook Trout Coalition.

Only 100 of these prints, signed and numbered by the artist, have been printed and are available.

All proceeds go for the benefit of The Sea Run Brook Trout Coalition.

This unique limited edition print was generated from a painting commissioned by SRBTC from a photograph of a sea-run brook trout caught and released at Red Brook, in the Lyman Reserve in Bourne MA.

Sales from the proceeds of these prints go directly toward funding ongoing research to understand the habits of these unique fish. Any findings are applied to help restore habitat that can enable sea-run brook trout to flourish as it once did in the past.

Primarily, research dollars are being used to leverage other work being done by partners including Mass Division of Fish and Wildlife, USGS’s Conte Anadromous Fish Research Lab, Trout Unlimited National and TU local chapters. All our revenue is being spent on fish tagging research so that we can better understand how sea-run fish behave, tracking where they go, when they leave their native brook, and where and how frequently they move within the stream.

Through tagging we have learned some amazing things. We’ve learned that sea-run trout will travel back to their original stream. This first-ever documented occurrence was discovered directly as a result of SRBTC funded PIT (Passive Integrated Transponder) tagging research where fish are electro-shocked and tagged with a tiny microprocessor based tag that identifies when that particular fish passes a tracking antenna.

You can see a simple Powepoint presentation of this process, equipment and preliminary findings >here<.

Habitat restoration on 2 streams on Cape Cod, namely Red Brook and the Quashnet River, are allowing substantial population growth of sea-run brook trout, namely because of the decade plus long efforts invested there by several local TU Chapters who have been working to remove dams and to restore fish friendly habitat.

Keep in mind if you wish to fish these streams, they are artificial-only and catch and release areas and are protected in this way by Mass Fish and Wildlife and the work of local Trout Unlimited volunteers.   And the best way to fish these streams is to hook up with local TU volunteers who monitor these waters almost daily, and they’ll be happy to show you around, and maybe even share with you what fly is working and give you a few tips.

Future SRBTC work will seek to understand sea-run trout behaviors from a genetics perspective to try to forecast if we have learned on Cape Cod can be extended to future stream restoration efforts in other areas. If the genetic work proves to confirm that sea-run traits are inherent in all native brook trout, this will substantially help ongoing habitat reconstruction or planning efforts in process in Maine, Massachusetts, Connecticut and Long Island.  If our research proves to be true, this will help us raise additional funding to help free up the many dam land-locked populations of once free running trout.

Without the funding secured by generous SRBTC supporters and partners, this work could not continue.